By 27, his drawings had made it to the Royal Academy of Arts (UK). After a stint in London, Michael returned to Australia and started his own architectural practice.

His most famous logo creation was the 2000 Sydney Olympic squiggle of the Opera House. Other logos Michael worked on include redesigning the Wallabies Rugby Union team logo, and logos for the Queensland Government, Harrods London, Fendi and Valentino. 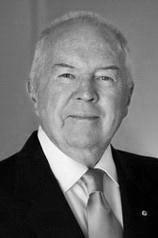